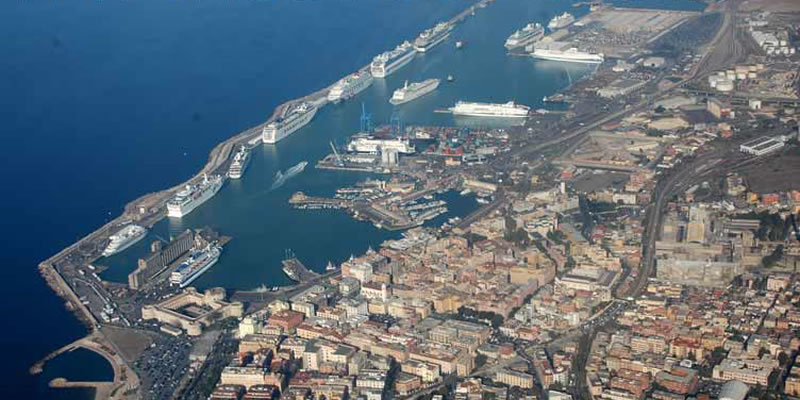 As early as 1861, with the new Kingdom of Italy, the need was felt to regularize the maritime traffic, satisfied with the promulgation of the Mercantile Marine Code dated June 25, 1865.

We know that over the decades much of the national history has also passed from the Port of Civitavecchia; all the fleets of the great imperial powers and Ponteficia have found shelter and asylum, confirming the validity of the choice made over 2000 years ago by the Emperor Trajan in building the port of Centumcellae.

The port of Civitavecchia was built at the behest of Emperor Trajan, founder of the city known then as Centumcellae, around 106 AD. It represented for many centuries the fulcrum of exchanges and contacts between the peoples of the ancient “Mare Nostrum”. The original structure of the port reflected the architectural criteria of the time with a large almost circular basin of about 500 meters, two large piers and an artificial wall, an artificial island stretched out into the sea to protect the basin. The entire structure was surmounted by two opposing towers, later called the Bicchiere and the Lazzaretto (still visible, and rebuilt by Sangallo).

After the fall of the Roman empire the port of Civitavecchia and the urban settlement of Centumcellae witnessed a succession of dominations and changes of hands, disputed between the papacy, various municipal powers and frequent Saracen raids. In the fifteenth century, after the city definitively returned under papal control, the port of Civitavecchia resumed its vigor and importance. It was first built the fortress, a quadrangular fortification, then in 1508 Julius I entrusted it to Bramante & nbsp; the construction work of the Forte Michelangelo, which would have risen on ancient Roman ruins. The fort was completed in 1537 thanks perhaps to Michelangelo’s contribution. In 1608, under the papacy of Paul V, a light was erected (the Lighthouse), on the southern end of the island breakwater, 31 meters high. On November 26, 1659, the foundation stone of the arsenal designed by Bernini was laid, which for a long time will coagulate most of the city’s economy. It was then built the crenellated walls by Pier Paolo Florian commissioned by Pope Urban VIII & nbsp; in 1630 and 1743 under the pontificate of Benedict XIV was erected the famous fountain by the sculptor Luigi Van Wittel, called Vanvitelli the same who designed the Palace of Caserta.

In 1679, built by the Pope Clemente XIII, Livorno door was built. Some of these structures were destroyed due to bombing during the Second World War. In particular, in 1943 the Faro, the Arsenale, the Forte del Bramante and the old Rocca were destroyed.