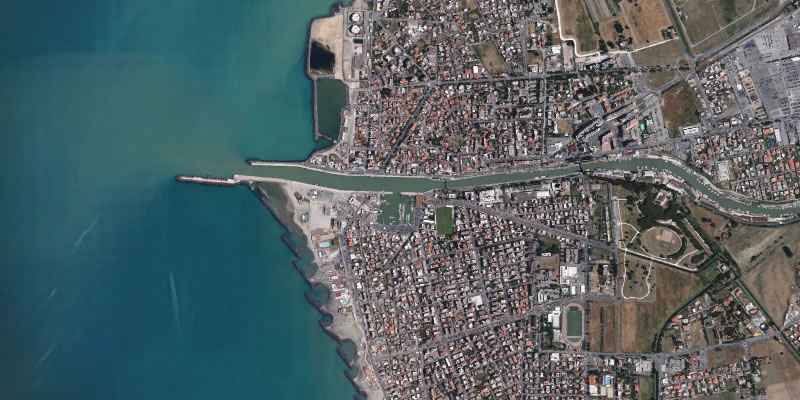 With the fall of the Roman Empire the Tevere saw to decrease his trafficis. Nevertheless  also during the darkest Medioevo the navigation tiberina didn’t disappear entirely never,  thanks to the initiative and the wish of some pontiff. Between the end of the XVII and the beginning of the  XVIII Century they are to make to go up again the serious and fruitful attempts for the resumption of the river traffic.
To Rome, in the 1692 Innocenzo XII it makes to build the I bring of Ripa Grande for the landing of the,  ships coming from Umbria and from the Sabina.

They are to quote some important events that are to show the rebirth of the river trafic, and that is: the transport, in 1827-28, of the columns of granite white of the Sempione tall 14 meters. For the construction of the basilica of S. Paolo; in the 1840 the transport prolonged up to the confluence with the Aniene of the obelisks of granulated that adorn Villa Torlonia and, always in the same year, the transport of the rocks columns of alabaster for the basilica of St. Paolo.

Fiumicino constituted the door of entrance for the direct traffic to Rome and certainly in the past centuries, numerous they had to be the “cries” or “notifications” compiled from the pontifical Government to discipline the navigation on the Tevere.

It is sharpen from one “notification” of on October 25th that we draw some data interesting. The pilotage, obligatory, it was working at least since 1817 and the pilots  they were held responsible in case of obstacle. All the boats that  they had to go up again the Tevere they were forced to lighten herself (notification of the  27.02.1839) in the case their draft results excessive and the operation  it had to be certified from a “minister entrusted of to regulate the lighter.”
Only when the ship had gotten the void one it hinders she could be  “attached to the vapor” (what she had replaced the draught of the buffalos) and towed to  destination.
The art. 3 of the Rule May 8th 1884 that it disciplines the navigation on the Tevere….